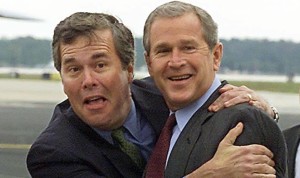 Back in August, John Ellis Bush gave a speech at the Reagan Presidential Library where he addressed foreign policy and the growing threat of terror from ISIS. The language was cushy, and focused on “support,” “international aid,” and “diplomacy” as solutions to halt ISIS and remove Assad. Apart from a few fun memes about ISIS recruiters on Twitter, and the tragic thought of ISIS’ black flag rising from Iraqi cities where American soldiers once died, the speech was an utter bore, which seems to be Bush’s norm: boring, boring, boring. In one of the United States’ most predictable (and fascinating, depending on how you look at it, and depending on whether Russ Baker’s book is factual) first-families, Jeb somehow finds a way to be the worst of the entire lot.

With a father and brother whose administrations were primarily defined by an obsession with all things IRAQ, Jeb seeks to straddle two drifting positions. On the one hand, family ties and allegiance to neo-conservative hawks encourages delicate caressing of the IRAQ invasion, and the expansion of U.S. interest abroad. On the other hand, Bush seeks a Reagan-man reinvention in the hopes that he will be seen as a peace-broker: someone to tear down walls and bring about international calm — “peace through strength; trust but verify.” With unanimity across parties on the failure of the Iraq War, Jeb acts like there is little left in the Bush foreign policy coffers, when the polls say something quite different.

The legacy of Bush foreign policy is difficult to decipher, which is exactly what Jeb and the other Republican candidates are being forced to do at this very minute. The American people have a sour memory of the rationale for Iraq (ask the man-on-the-street why we invaded in the first place and he’ll usually scratch his head and mention “something about 9/11?”), but the ISIS calamity has helped the nation of Iraq take a turn for the worse, which bolsters Republican war-chips on the table. The majority of Americans agree that Obama mishandled ISIS, and put America in a weak spot via the Iran negotiations. With the perfect punching bag in the corner, Jeb shouldn’t have had any trouble making quick work of Obama’s manzy-panzy approach to dealing with the Middle East.

Unfortunately, that only makes it more embarrassing when Jeb trips his way down the media avenue, trying to give a coherent answer about a future Bush administration’s foreign policy. With more pounds than his predecessors, and less charisma, Jeb ends up looking like a deer in the headlights, confused about which way to turn (and certainly not agile enough to move if he wanted to). George Jr. and George Sr. had their base in the neo-conservative die-hards, who went school-boy giddy at the thought of asserting their military prowess on an international scale, blowing up sand-dunes and waving the red, white and blue in Persia. Instead of staying in the family business, Jeb has moved from selling made-in-America militarism with boots on the ground, to insisting high-efficiency (which is another word for less horsepower, let’s be real) airstrikes and “key” alliances will save the day. This approach ends up looking like an Obama administration response to ISIS, just pumped up with a bit more firepower and more “diplomacy,” which just means more steak-dinners in the Middle East.

All of this stems from the same reinvention that is getting the Republican party absolutely nowhere. The biggest flop for Jeb is mistaking disdain for the Iraq war as a bear-market signal to turn and run. Rather than buying into a clear majority of bipartisan support for a “make ISIS pay!” play, Jeb and the rest of the Republican calves are running for the hills, hoping to be the last man standing on the “no more war!” mountain. Hearther Parton over at the Salon called it an “identity crisis,” but I couldn’t disagree more. Jeb and the Republicans know what their aims are, and they aren’t confused about what they want to do: the Middle East will be engulfed in glorious brimstone and hellfire, no matter who takes office.

Rather, the crisis is their high-pitched media presentation of conflict-avoidance, with each candidate hoping they can be the last one tied to a promise of all-out-war. This isn’t an identity crisis. Instead, tt’s a dangerous game of Mumbley Peg, with everyone promising as much militarism as they think they can manage without losing their entire campaign to the “warmonger” label. The conservative base flirts with life and death on a daily basis, and, shockingly, continues to voice support for more troops overseas, even after Iraq and Afghanistan. Donald Trump is the only candidate who has fully embraced a war on ISIS, and, thus far, his poll numbers continue to soar. If Jeb had pulled up his britches and embraced such a position early on, instead of running from it, he’d have held the masses captive with a promise of resolution in the Middle East. Despite the huge blunder in Iraq, Americans continue to associate the Bush dynasty with American military might. With dead babies washing up on the beaches of the EU, even Europe will give their nod to a family they are confident can handle another sandy mess.

Robert Kagan insists that America has gone soft, and turned away from a stiff-jawed resilience for war and conflict. Apparently he hasn’t been watching Donald Trump, who said, when talking about ISIS:

Ironically, it is Trump, not the tight-lipped Bush, who has been drawing crowds of 20,000 to hear his plan for “mak[ing] America great again”. Contrary to Kagan’s belief, America, and Republicans in particular, are already beating the war-drums. Damned be political-correctness; damned be Muslim invaders; damned be apathetic foreign policy. This is the reborn interventionist: if American interests don’t exist in a foreign conflict, create American interests — harvest a nation’s resources and wealth, and build up the American stockpile.

Jeb had the legacy and the formula for success as a Republican interventionist, but he ran from the family recipe with his tail between his legs. With two Bush’s in the White House in our lifetime, each practicing a similar foreign policy, you’d think Jeb would finally take a hint and recognize that Republicans will bemoan intervention and boots on the ground from sunup to sundown, but, when push comes to shove, the party itself gets high on military campaigns. Why use a hammer when you can bring a tank and blow the whole place up? The Republican party is a party of war, which ends up spelling success for the candidate who harnesses resolve and promises to do the dirty work required.

With tensions high, and otherization at a fever pitch, it’s just a matter of time before Bush 3.0 ends up back in the White House and sends more troops, more dollars, and more hostility overseas in a bid to maintain world order and US dominance. However, it looks less and less likely that Bush 3.0 will be a Bush at all.

4 thoughts on “Still Convincing Himself: The Bush Dynasty’s Worst Leftovers”