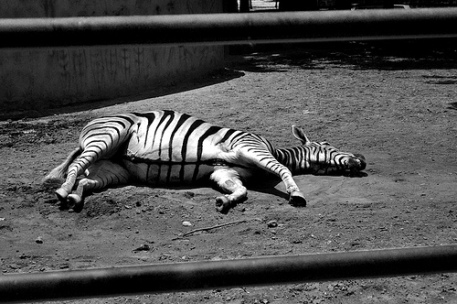 There was a particularly nasty piece of drivel published on Salon yesterday, all about the myth of “meritocracy.” According to Ms. Cooper (AKA, “professorcrunk”), the entire construct of society as we know it is pejorative towards black people, tearing down any semblance of objectivity, and building its entire assumption about the world, emotion, feeling, and success around whiteness — in particular, MALE whiteness. Crunky gives no solution to the perceived slight from society, which means that, had she been born in Athens and run around in a white toga, she’d probably have been forced to take the hemlock.

I’m most fascinated by Crunky’s assertion that “The United States was not built on a system of meritocracy. It was built on a system of denied access.” The reality is that Crunky’s argument is old and gutless. She wouldn’t be happy unless Matt Damon had his money, cinema contracts, and good looks stripped and given to Tyrell Damon. But Crunky doesn’t need to pick on Matt Damon if she wants to point out celebrities who are steeping society in a furtherance of WHITENESS. Shaq recently admitted that he turned down a major business opportunity with Starbucks because he believed “black people don’t drink coffee.” This should actually make Crunky HAPPY, since Shaq is admitting that the “universal” – AKA, WHITE – assumption that everyone (again, WHITE PEOPLE) likes coffee actually destroys the individuality of demographics that prefer sweet tea, or Ovaltine.

The only problem is that, because Shaq bought into the assumption that things like coffee are just for WHITE people, he lost a lot of money. Unfortunately, money is neither black nor white — it’s green and it pays for coffee, sweet tea, AND Ovaltine. Crunky wants us to believe that the rhetoric is all about continuing to oppress (ZINN!) with an interpretation of BLACK success that universally characterizes it as charity or a handout. Ironically, I have had the same assumed about me as a WHITE MALE throughout life, except that the source of the charity and handout wasn’t assumed to be Affirmative Action or big government. If I had a dollar for every time I heard “well, he achieved/received/excelled at ________ because of all that money,” not only would my parents be rich, but I would be too.

I imagine that there’s a balance to be had which can weigh the impact of our conscious values and responses to our subconscious assumptions and historical impressions. Malcolm Gladwell talked about something akin to this in Blink, where he discussed an Implicit Association Test designed to look at our stated values and compare them to split-second choices that belie our true feelings.

Our attitudes towards race and gender operate on two levels. First of all, we have our conscious level. These are what we choose to believe. . . . which we use to direct our behavior deliberately. . . . But the IAT measures something else, our attitude toward racism on an unconscious level. the immediate, automatic associations that tumble out before we have had time to think. We do not deliberately choose our unconscious attitudes . . . [and] we may not even be aware of them. The giant computer that is our subconscious silently crunches all the data it has from all the experiences we’ve had the people we’ve met, the lessons we’ve learned, the books we’ve read, the movies we’ve seen . . .and it forms an opinion. That is what is coming out in the IAT. The disturbing thing about the IAT is that it shows us that our unconscious attitudes may be utterly incompatible with our stated values.

Although the notion of unconscious attitudes intrigues me, I find myself wondering how Bellewether might respond. After all, the IAT is designed to find the deep-rooted assumptions one receives from culture, history, and community. Such assumptions extend far beyond those on race, and they are bi-directional. It is just as possible that a black person would sub-consciously view all whites as oppressors as it is that a white person would view all blacks as merit-less. Additionally, such a test does little if anything to point out how one should rectify such unconscious attitudes — who is responsible for the impressions received from society? Crunky can argue that history has engrained the white-power moniker in the subconscious of every black person, but how long can that history be blamed on present-day responses and reactions? At what point does our determinism and resolve change the cultural and historical rhythm?

Crunky is trying to have her cake while eating everyone else’s at the same time. She wants to see blacks elevated in the conversation and treated for the merit they “deserve”, but her example of where this isn’t happening revolves around Minaj and Cyrus…. Is this really a justification for the attack on meritocracy? Crunky argues for why a black woman is more deserving of an award than a white woman for flashing flesh, and somehow WHITE MALES are the ones judging based on unconscious prejudice instead of merit? God forbid we decry both of them for the sorry wretches that they are: two girls flailing about on a stage, broadcasting their sexuality to the world because there’s nothing worth hearing them utter. At least the Adventures of Huckleberry Finn didn’t have Huck and Jim GYRATING naked across the Mississippi, with Huck winning an award at the end. Both Huck AND Jim were far too civilized and reasonable to behave so foolishly.

It shouldn’t surprise anyone that Crunky responds this way when confronted with the notion of “meritocracy.” Back in 2012, Obama spelled out the same notion: that individuals can never fully take credit for their successes, since they inevitably profited from someone else’s efforts or aid.

There are a lot of wealthy, successful Americans who agree with me—because they want to give something back. They know they didn’t—look, if you’ve been successful, you didn’t get there on your own… If you were successful, somebody along the line gave you some help. There was a great teacher somewhere in your life. Somebody helped to create this unbelievable American system that we have that allowed you to thrive. Somebody invested in roads and bridges. If you’ve got a business—you didn’t build that. Somebody else made that happen.

It’s impossible to ignore the absurdity of this statement when confronted with one of the primary examples of the black-exceptionalism movement: the boy-kept-down-by-problems. Stories about kids who overcome adversity are a dime a dozen, but nowhere are they so closely cherished as in the black community, where they are held up as examples of the exceptional will-power and talent of those who made it DESPITE the overwhelming obstacles. Conversely, every time some rich, white person comes on the scene, it’s UNIVERSALLY accepted that they were somehow successful because of someone else??? Give me a break Crunky.

The irony is that this only furthers the divide between societal assumptions and reality, and CRUNKY is the one propagating the formula:

I’m not saying that there are not commonalities of human experience in which we can all share. We can. But as a Black person, I have been taught to find myself and my experiences in a range of “classic” stories about white people, whether “Tom Sawyer,” or “Of Mice and Men,” or “Lord of the Flies.” White people are not taught to see themselves or find their human struggles in “Their Eyes Were Watching God” or “Giovanni’s Room” or “A Raisin in the Sun.”

Are white people unable to find themselves in the literature of ancient, olive-skinned Greeks, or oriental Confucianism? Great literature speaks to truths about the human condition: love, suffering, joy, mortality, and the divine. However, as communities of people communicate their inability to relate on universal (REALLY universal) feelings and situations, society becomes more convinced that they ARE a freak show and that they ARE strange and foreign. Such a failure is bidirectional — a product of intolerance and otherization as a result of our own arrogance and bitterness. But let’s not allow Crunky or anyone else fool us into believing that we must forever be defined by the failings of our former days. The human capacity to overcome is immutable, and even amplified by the trials everyone endures. For, as we are told by Homer, “Even his griefs are a joy long after to one that remembers all that he wrought and endured.”