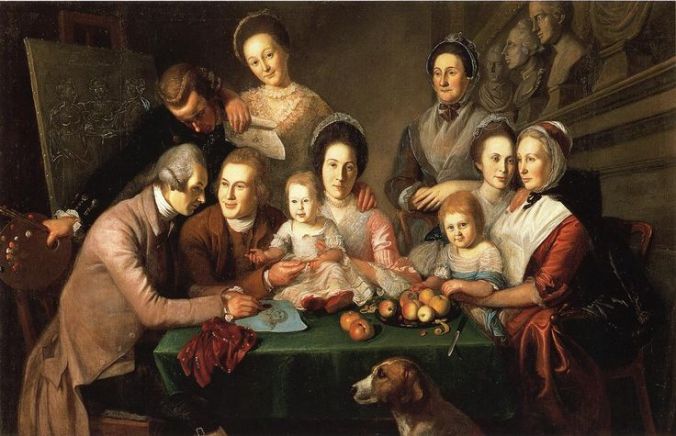 The 18th Century: The Transformation of Family is Nigh

The ideologues of past centuries taught that with the  proper adjustment of material-political circumstances mankind could escape the world of necessity and enter into an era of peace, prosperity, and personal happiness–the problem of evil all but eliminated. As a matter of faith, ideologues believed that the solution to mankind’s trials and tribulations lay without, not within. Tinker and be saved.

While our country certainly has its issues, it would be foolish to deny that we live in an era of unprecedented wealth and opportunity. Our politicians may squabble over the distribution of wealth while eschewing the bombastic proclamations of old world ideologues, but they all agree that wealth and more of it is good. And yet they rarely note that wealth itself has not solved misery. More importantly, and paradoxically, the individual and civilization both labor under the burden of gold and liberty. Nowhere is the suffering and confusion more apparent than in Americans’ romantic and family relations.

A “Conservative” With Some Partial Truths

David Brooks in a recent article points out that marriages across the country have become increasingly polarized: the best are better than ever, but all the marriages short of that glowing standard are weaker than in generations past. This at a time when people demand more and more out of marriage: the relationship must satisfy “financial, emotional, and spiritual needs.” The pressure, not surprisingly, has resulted in around half of American marriages ending in divorce.

Brooks lays out three lenses to ensure successful relationships and marriages. One is the psychological-analytical. Crudely put: follow this checklist produced by smart guys in lab coats who have crunched the data. If your potential mate doesn’t checkout, move on and don’t hold your breath that they might change because chances are they won’t. There is certainly something reassuringly definitive in such an approach. If half of marriages end in divorce, this list should increase the odds at the roulette table. The second approach is the romantic. Crudely put: a few passionate years between the sheets and being googoogaga should form an intense enough bond that when the going gets rough, you hang in there. If you fuse these approaches, you get a modern romance.

But Brooks reaches out for a third option: the moral-religious. Citing the prominent, conservative NYC pastor Tim Keller, Brooks describes this approach:

Tim Keller argued that marriage introduces you to yourself; you realize you’re not as noble and easy to live with as you thought when alone. In many marriages there’s an unspoken agreement not to talk about what you don’t admire in the other, because the truth from a loved one can be so painful. But in a good marriage you identify your own selfishness and see it as the fundamental problem. You treat it more seriously than your spouse’s selfishness.

The everyday tasks of marriage are opportunities to cultivate a more selfless love. Everyday there’s a chance to inspire and encourage your partner to become his or her best self. In this lens, marriage isn’t about two individuals trying to satisfy their own needs; it’s a partnership of mutual self-giving for the purpose of moral growth and to make their corner of the world a little better.

Brooks concludes that some combination of the psychological, romantic, and moral gives one the best chance to make it. But it is this last element, the moral, that he thinks culture is missing. He speculates, “Maybe that’s one of the reasons the quality of the average marriage is in decline.” Brooks is one of the few moderate voices (moderately) declaring that their is something wrong with libertine culture. His criticism is to the point (although I will take issue with part of it in a moment) but doesn’t address the fundamental shift, which did not happen in the realm of morals, psychology, or emotions, but rather in the material arrangements of culture.

Robert Nisbet broke onto the conservative scene with his book The Quest for Community (late renamed Community and Power) in 1953. He argued that the conservative sense of home, family, and community was intimately linked to the need to provide for the brood. Nisbet:

In earlier ages, kinship was inextricably involved in the processes of getting a living, providing education, supporting the infirm, carrying for the aged, and maintaining religious values. In vast rural areas, until quite recently, the family was the actual agency of economic production, distribution, and consumption…Organized living was simply inconceivable…outside of the context provided by kinship… it was an indispensable institution (Nisbet 59).

Nisbet suggests a strong correlation between cultural ideals (loyalty and devotion to kin) and practical necessity. Love and mud. The stars kiss the feet. With the emergence of an affluent capitalistic society and the safety net of the State, though, the individual depends less on traditional social structures.  Subsequently the importance of family diminishes. Family has become increasingly dispensable because of economic prosperity.

There is some irony here: the run-of-the-mill conservative praises the free market to the skies, but misses the fact that the institution of the family in many ways depends on brass tacks necessity. But even as affluence liberates man from the bonds of necessity, the liberal misses the fact that this new prosperity creates insurmountable psychic pain. Granted they find family and friends agreeable, but only in-so-far as it is chosen by the individual. But this is not enough. Nisbet:

The interpersonal and psychological aspects of kinship were never made to rest upon personal romance alone or even upon pure standards of individual rectitude… The individual may indeed derive vast psychic support and integration from the pure fact of group membership, but he will not long derive this when he becomes in some way aware of the gulf between the moral claims of a group and its actual institutional importance in the social order (Nisbet 60, 61).

Brooks and conservatives fight the aloof liberals (who are blind to the consequences of their philosophy) but rarely address the loosening of necessity’s bonds. Why be good if you can find another lay? The liberal mantra “Well, that relationship just didn’t work out,” is deeply engrained and made possible by the relatively no-consequences affluence of society:

The current problem of the family [romantic relationships], like the problem of any social group, cannot be reduced to simple sets of psychological complexes which exist universally in man’s nature, or to an ignorance of sexual techniques, or to a lack of Christian morality. The family is a major problem in our culture simply because we are attempting to make it perform psychological and symbolic functions with a structure that has become fragile and an institutional importance that is almost totally unrelated to the economic and political realities of our society (Nisbet 62).

Herein we find a root of the problem: the breakdown of the family and marriages is inextricably and crucially linked to the phenomenon of economic prosperity. The material crisis preceded the moral crisis. And this should not be a surprise. Rome, at the height of her virtue, slew Carthage and the plunder in turn slew Rome. The question: how do we restore the psychic and moral benefits of family in a world that sees no need?

“People do not live together merely to be together. They live together to do something together.” In the older sense, doing something was surviving. Capitalism and the State has made survival a great deal easier. In the modern, liberated sense, there is no equally compelling reason to “stay together.” But few are happy. The liberal insists that this is just reality, the price of freedom and future happiness, but that begs the question, “Is there a better way?” The issue is unanswered by the liberal and this is where the conservative retains a leg up because they at least acknowledge the problem and propose a solution.

So back to Brooks’ challenge: the modern world needs to consider the moral component of relationships. Sacrifice over selfishness; self-scrutiny over other-scrutiny. There is something here but his reading of Keller (a conservative, Presbyterian minister) is stunted. Brooks’ has the Christian vocabulary but lacks the animating blood. All we have left is a sort of Zen Buddhism: denying self and pain and therefore learning to ignore and transcend the mental suffering and through this death-to-self acquire bliss. Brooks reduces Christian marriage to a paradox stripped of the thing that enables the believer to pursue self-giving: namely, God, the ultimate giver-of-self. It is this transcendent aspect, God becoming flesh, dying for man, and promising the presence of his Holy Spirit (weird stuff), that empowers Christians to pursue self-sacrifice. This is not a matter of willpower. The be-attitudes only get you so far without the apparent hocus pocus. This isn’t to say people can’t be good apart from the big man in the sky, but Brooks removes the central spiritual organ and demands the function. We’re left with a self-help guide, a method. Want a better marriage? Try sacrificing and being more introspective! Need inspirational examples of sacrifice, read some Scripture! But Christianity is not a trick or technique. It is not platitudes. It is premised on the presence of the living God. Brooks’ moralism is not what Keller has in mind.

The modern world certainly lacks the the blazing necessity of commitment. The freer we have become materially, the looser we hang on the world emotionally. Indeed, considering the grand scope of human history, the material affluence the West enjoys is freakish in comparison to that which has preceded us. There is relatively little material cost, after all, to going splitsies or abstaining from siring children (women in the 13th century weren’t so lucky). Sexual flexibility is contingent on prosperity, though, and this makes sexual self-determination in some sort of transcendent sense a dubious proposition. Smoke ’em if you got ’em, I guess, but don’t pretend it’s an eternal right.  Oddly enough, our conquest of the material world was suppose to enable us to move into higher, spiritual-psychological union with others, but what we have found is self-destructive narcissism and the fragmenting of community. Necessity has its own virtues, but can we retain an older sense of virtue (loyalty, duty, love) without necessity? That is the question.

Maybe a good ole’ fashion dark ages would do relationships some good. The arrogance of moralistic conservatives and progressive optimists would find itself face-to-face with brass tacks necessity. But I don’t think that morality depends on necessity, although it is certainly a help. The deeper question Brook’s is trying to answer is whether or not there is a moral order and how that order gives human being direction in an era of unprecedented affluence. Is there something beyond emotions and psychology that bind people together? Should “I’m not in love anymore” really be the end of it?

One thought on “Modern Romance: On Relationships and Necessity”