I live in Harlem, but I’m an outsider. Race is the obvious reason for this: I can walk a half mile in Harlem and only see a couple white faces. But race is not the only reason. Many of families in Harlem have lived here for generations. In this way, my status of outsider would be similar in backwoods West Virginia.

A fellow white resident told me he felt like an occupier living in Harlem. This struck me as an overwrought and guilt-ridden way of looking at the situation, but he accurately identified a level of unease. But the unease is diminishing to an extent: young white professionals who want to live in NYC have begun moving into Harlem because the rent is cheaper. Over the past year, I’ve noticed an uptick in white faces. This white migration in turn has begun to contribute to the gentrification of the area and the slow but steady rise of rent costs that will ultimately drive out multi-generational black families. This in turn has led to guilt-ridden condemnation of gentrification—numerous white neighbors argue this line. It’s quite nauseating especially when coupled (as it always is) with cliché anti-cop rhetoric. It’s straight up hypocrisy: if they really cared about preserving black Harlem, they wouldn’t move there. So why do they?

The irony is that the whites that tend to live in Harlem are not wealthy ones relative to their other white peers who can afford nicer apartments elsewhere. It’s the teachers, artists, waitresses, aspiring sommeliers, and tech workers who gravitate to the traditionally black neighborhood for housing that they can afford (and barely at that). The hard-working, less well-off white millennials, not the affluent rich ones, are guilty of contributing (although not single-handedly) to the transformation. Full of guilt, yet wanting to live in NYC, they are the sad whites who, if they could, would avoid the stain of invading and occupying a black neighborhood.

While most of the locals don’t seem to mind us white folk, hatred of the haunting white specter manifests itself most clearly at Nation of Islam and Black Power rallies. I have witnessed such events only a few times, but the disdain for my type is visceral. I’m not one to scare easily, but the stare-down you get from a young black man wearing a paramilitary uniform at a protest has a way of quickening your step. The experience is unsettling but refreshing. You know where you stand with these folks. My housemates and apartment neighbors all seem rather sanguine about the situation. It sucks when you feel threatened, but it happens. You live on. White guilt is expiated for a moment and then you get to return to your cheap apartment cleansed.

So what’s the solution to the guilt and hypocrisy? Simple answer: historical consciousness. The island of Manhattan gets its name from the native tribe that inhabited the small finger of land at the time the Dutch arrived back in the first half of the 17th century (Who can say whether or not the Manhattans stole the island from another tribe). The Dutch set up shop on the south part of the Island and named their bustling port New Amsterdam. A small village developed on the north side of the island, which they named Haarlem after a town back home (the name described well the old Haarlem, “home on a forested dune”, but didn’t quite describe Haarlem, New York). After the Dutch came the British. They kept the name although not before trying to change it to Lancaster. When that didn’t work they dropped an “A” and called it a day. Harlem became a sleepy resort town of sorts for the wealthy (I often run by Alexander Hamilton’s well-preserved house. His grave is down by Wall Street.). And then came along the late 19th century: poor Italian and Jewish immigrants took over the neighborhood. Not long thereafter the Great Migration began to kick into gear as poor blacks arrived from the South en masse. Soon Harlem became majority black, but there was also a good bit of immigration from Puerto Rico and Latin America that took over parts of East Harlem after World War I. And now, yet again, come the “poor” whites but this time of non-specified European origin. Change is about the closest thing you can get to a law of history.

The transformation has brought about more grieving this time around, though. The African-American community has deep emotional and spiritual roots in Harlem. Back in the day it was the site of intellectual ferment and artistic accomplishment—the best of what their community had to offer the nation and the world. The names of Harlem’s streets and parks reflect this: Martin Luther King Jr. Boulevard, Marcus Garvey Park, Malcolm X Boulevard, Jackie Robinson Park, Frederick Douglass Boulevard, and the names of every black musician in front of the Apollo Theater. The transformation of Harlem is no small thing. An era is passing and one ought to mourn it.

But change is part of life. Nothing ever stays the same. Like most of my white colleagues, I’m a guy just trying to make it by like migrants before me. I will live my life, be kind to my neighbors and folk on the street, and do my business locally (Dry cleaners: Korean. Laundromat: Chinese. Bodega: Arab. French Restaurants: West African immigrants. The cultural milieu of Harlem is far more diverse than the simple white-black dichotomy.). I feel no guilt, but I do find the slow passing of the capital of the African American community sad however inevitable. Change is part of life.

As I’ve written elsewhere, poorly educated people see a word and phrase and jump to conclusions. 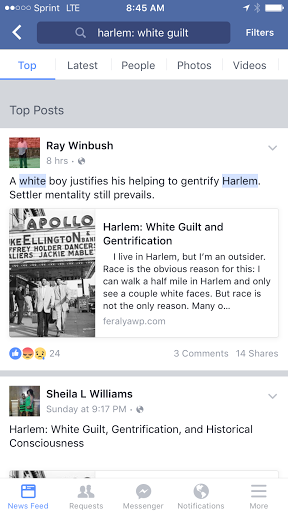 Obviously, before the Africans showed up, no one lived on the island of Manhattan, and certainly not the northern extremity. Consequently, Harlem has been black since the beginning of recorded history. In fact, the name itself hails back from a mighty trading town on the vast plains of the Congo. The white invader, coming with fire and sword (blueprints for a Starbucks) must be destroyed via the all powerful shaming. We are civilized, after all, and don’t believe in returning fire with fire.

One thought on “Harlem: White Guilt, Gentrification, and Historical Consciousness”